O'FallonTheatreWorks has been an active part of the community since 2001. Productions include musicals, dramas and comedies. Performances are held at O'Fallon Municipal Centre (City Hall), 100 North Main Street. Ask about discounts for groups of 10 or more. 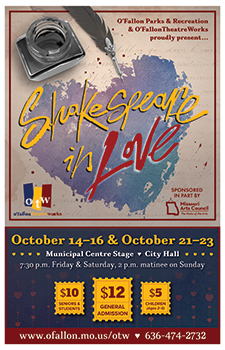 Shakespeare in Love, a fast-moving romantic comedy set in 1590s London, follows the trials and tribulations of Will Shakespeare, a struggling young playwright suffering from a dreadful bout of writer's block. No matter how hard he tries, he just can't seem to make any headway with his latest work, Romeo and Ethel, the Pirate's Daughter. Somehow, even the title doesn't sound right!

Then he meets (and falls instantly in love with) the startlingly beautiful Viola who, desperate to become an actress, disguises herself as a man to audition for his play. Inspired by love, his creative powers are unleashed as his great love story Romeo and Juliet is brought to life for the first time!

Purchase Tickets to Shakespeare in Love Plan a route to the O'Fallon Municipal Centre

Sign up for the City of O'Fallon's weekly e-Newsletter

Receive weekly updates with the latest news, upcoming events and important information from the City of O'Fallon.